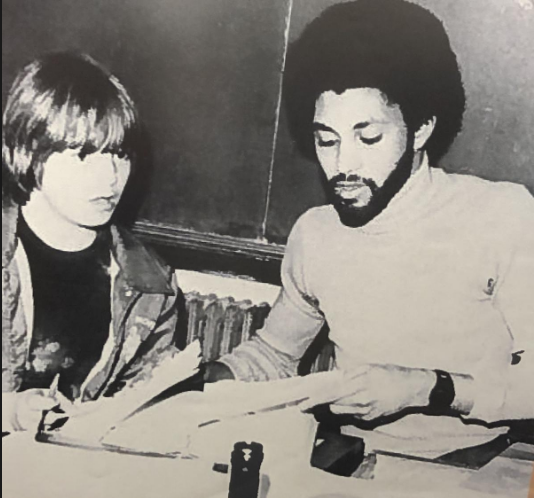 About 40 people attended the dedication ceremony, including family members and former colleagues. Speaking of her brother, Carita Rhodes Hairston said that he was very giving and humble and known for writing poetry and being a track athlete and noted, “Everybody loved him.” His two other sisters, Sherri Rhodes and Glenda Rhodes also attended the ceremony, with Sherri commenting that having the alternative education center named for her brother was “overwhelming.” She went on to say, “I’m proud they’re recognizing him for his work that he did for the kids. It’s well-deserved on his part. I wish he could have been here to see it.”

Brenda Neal, former head of the Winchester Alternative Learning Center (WALC) and former colleague of Rhodes, teared up as she spoke of him and how much she had learned during their years together. She spoke of how apparent it was that he had such a way with kids – the ones who made poor decisions – and how he continued to work even as his health declined. She said that during her last meeting with Rhodes, he was more concerned about the future of the alternative education students in Winchester than he was about himself and told her to “…never let Winchester City Public Schools forget about our alt-ed kids. They don’t have a voice.”

“Melvin’s students were successful .... many by walking the steps of John Handley High School to graduate and many by allowing them to deal with the emotions of life’s challenges, quite literally saving their lives at a critical time,” read a sign featuring a picture of Rhodes that was unveiled at the center. “His legacy challenges each of us to nurture the best in each child every single day.”