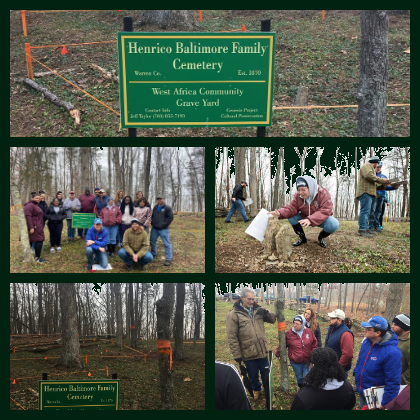 On Friday, January 24, Professor Jonathan A. Noyalas, Director of Shenandoah University's McCormick Civil War Institute, and teams comprised of students and staff from both Shenandoah University and Winchester Public Schools collaborated to begin the process of documenting the history of Henrico Baltimore Family Cemetery. The West Africa Community Grave Yard, located east of Middletown, contains the graves of nearly 150 enslaved individuals and free blacks. The graves date from the 18th century to the early 20th century.

This initial documentation effort included mapping the site. As work continued, the team's research expanded to identifying grave markers with special markings. The team also searched for additional stones and discovered one belonging to a former slave which had been partially buried in the ground.

As the project continues, the team will work on gathering, interpreting, and contextualizing documents associated with this property that will eventually be used for proper historic recognition.